Elaine's 6-month long, first line chemo-therapy treatment finished 4 months ago, in October, and she's looking positively radiant. Now that she can taste again, she's put on a little much needed weight. Her hair has grown back into a very short but very attractive style, and people who don't know her or about the cancer spontaneously tell her how cute it is. (She's said, "My oncologist did it for me.") The bruising, the digestion problems, the numbness in her feet and hands, the relentless fatigue all have improved as we've entered the honeymoon period that is remission.

We're delighted about but wary of remission. While we always want to be supportive, we wince when we hear people with cancer say they've "beaten" it or that they're "cured." Cancer is a ferocious, sneakily predatory shape-shifter, and it doesn't always go away.


The numbers on ovarian and primary peritoneal in the literature appear to be all over the map, but our understanding is that about half of women will have their cancer recur within 3 years of the completion of the first line chemo-therapy treatment, and between 70%-90% will ultimately have it recur. The good news, of course, is that statistics never define anecdotes, and that there's a bell curve of survival. At the right end of that curve, there are women who live 15 years and longer and, in general, they tend to look a lot like Elaine. They're fit. They eat right. And they're positive. Or at least that's our story and we're sticking to it.


Even so, we know that conventional therapies are just that, and that its the next paradigm of treatments that promise to be much more successful. Recently I attended a cancer conference where I spoke with the keynote presenter, a very prominent and experienced researcher on cancer and genomics. He suggested that, because we're in a waiting period, that we do just that to let the science cook and mature a little more. He said that there's so much promising evidence that's emerging, and so much more that's coming down the pike, that we should take advantage of our time to just, to the extent possible, relax. Then, a year or 18 months from now, we can re-engage. It seemed like very sensible advice.


Still, we don't want to be complacent, and we do watch the literature - and particularly information about genomics and epigenetics (the science associated with how environmental factors can influence gene expression) - to try to catch anything that might be useful.


Most interesting and relevant recently was the ICON 7 trial - see here for a video interview of the study's Principal Investigator - showing that the administration of the genomic drug Avastin in the treatment of ovarian cancer, immediately following the completion of conventional chemotherapies, resulted in a significant improvement in progression-free survival. Avastin tries to starve tumor growth by inhibiting the growth of new blood vessels to the tumors. The rationale is that, right after the conventional therapies have knocked back the tumors, residual micro tumors are most susceptible because they need new blood vessels to keep growing.


(It's worth mentioning that the success of Avastin differs by cancer type. There's been a lot of news lately about an FDA panel's 12-1 vote to remove indication of Avastin for breast cancer. Four different studies had shown disappointing results. That said, oncologists are not prohibited from administering it.)

So this week, Elaine initiated the first of 17 cycles of Avastin, once every three weeks for the next year. They infuse the drug through the port she still has in her chest - a genuinely wonderful device that replaces the need to insert a new pathway each time you get infused - which means minimal pain and fuss. While Avastin has a range of potential side-effects, as a rule they're nothing on the order of the poisonous treatments associated with conventional chemo-therapies, and so we're hoping for the best.


In addition to the ongoing stress of living with this monster, there are minor frustrations.
The other day, we had a local marathon for breast cancer that attracted 10,000 runners from all over the world. The race started across town but they ran through our neighborhood, shutting down access in and out of Atlantic Beach for several hours. There were big "Save the Tatas" signs all over the place. While breast cancer is terrible and we're sympathetic, the marketing effort has been so overwhelmingly successful that the other cancer research and consciousness-raising efforts get short shrift by comparison. It's not rational exactly, but Elaine and I want to say, "What are we? Chopped liver?" Ever helpful, I did my best to console her by pointing out the utilitarian desirability of breasts relative to, say, other organs.
All in all, Elaine's doing great. She's had fabulous care from a very open and knowledgeable physician team, great financial, professional and emotional support from our friends at Blue Cross, and an outpouring of concern from friends. My many colleagues who have met her never fail to ask about Elaine.
She officially retired at the end of the year, and her colleagues threw her a party. I walked in believing her projection that there would only be a handful of people there. There were 75, and many offered moving tributes to her humanity and professionalism. It was inspiring. 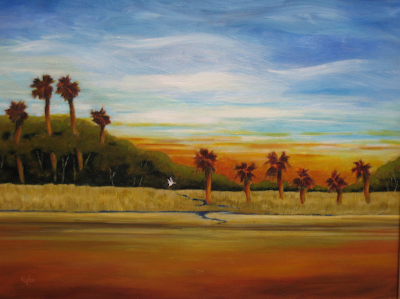 Now that she's retired, she has lunch out several times a week with her many pals. She's painting, playing the piano, doing yoga again. Here's one of her more of more recent paintings. We're anything but through this, but for now, her spirit is bright and she's thriving.
Posted by Unknown at 2/20/2011